Do you knit or crochet, do you want something to do as the nights draw in. We are looking for 100’s of knitted or crocheted stars, we plan to attach them to the railings outside the church as a sign of hope this advent/Christmas. We can provide you with a pattern and wool, all we ask is that you knit or crochet them in bright colours and have them ready for the end of November. Please get in touch with Vanessa Twomey either by email – chrchdmnstr@outlook.com, telephone – 07394173977 or facebook.

PARTNERPLAN
121 George Street, Edinburgh, EH2 4YN
T: +44 (0)131 225 5722 E: world@churchofscotland.org.uk
Scottish Charity Number: SCO11353
Fiona Kendall – Italy
August 2020
FCEI – Mediterranean Hope
Via Firenze 38
00184 Roma, Italy
fkendall@churchofscotland.org.uk
Dear friends
I hope this finds you safe, well and in good spirits. I am conscious that the past six months have
been a testing time for all of us and that, for some, this continues to be the case.
I remained in Rome throughout the Italian lockdown, which began nation-wide on 9th March 2020.
From the outset a strict regime was enforced: essentially, we could not leave our homes other than
to shop for groceries, attend medical appointments, work or exercise. All who could work remotely
were asked to do so. A self-certification form was required at all times and fines of up to EUR
3,000 levied for those not complying with the measures. A gradual easing began on 4th May.
Whilst we remain obliged to wear masks in all closed public spaces, including on public transport,
and 1m social distancing remains in place, in many other respects much of the old life has
resumed. For a culture which spends much of its time outdoors and in the company of others, this
is a huge relief.
The past six months have provided me with new insights. I have come to appreciate as never
before the significance of freedom of movement and the value of human connection. I have been
moved not only by seeing folk “for real” again but also by how friendships were made across
balconies and strengthened online. This was unexpectedly underlined in June when I spent a
week in one of Rome’s hospitals after breaking my collarbone whilst out running. Admission was
subject to a negative test for Covid 19 and, for obvious reasons, no visitors were permitted. Virtual
contact there was absolutely invaluable. What a blessing to be able to continue to speak to family
and friends, attend church and even work meetings!
A working group from the Italy Waldensian and Methodist Churches was very quick off the mark in
trialing “Zoom Worship” on 15th March, less than a week after the lockdown was imposed. For the
sixty or so of us who participated in that first try at online worship, it was very powerful to come
together, to see one another’s faces and to be reminded of the constancy of God and faith in even
PARTNERPLAN
121 George Street, Edinburgh, EH2 4YN
T: +44 (0)131 225 5722 E: world@churchofscotland.org.uk
Scottish Charity Number: SCO11353
the most extreme situations. At its peak, participants numbered around 400 – but it was not long
before other churches, including the congregations with which I am directly involved in Rome,
began to offer services via YouTube, Facebook and other means. If you are like me, you will have
enjoyed being able to dip into a number of different services from around the world and to
participate with family and friends in far-flung places as well as close to home. We are now
tentatively returning to church buildings but it is now clear to me that both virtual and “in person”
worship have much to offer.
The Federation of Protestant Churches in Italy, of which the Mediterranean Hope project is part,
responded quickly to the pandemic and raised significant funds to help to alleviate extreme
suffering. The MH team adapted well to remote working. With the exception of those in Lebanon,
who were recalled for their own safety, everyone else remained in situ. We have all stayed
connected with each other and with the migrants we care for via telephone, Skype and Zoom. The
larger scale meetings which normally take me to other cities and countries have also proceeded
virtually. I have found this a very efficient – and environmentally-friendly – way of working. I very
much hope that this will continue, whether or not we are able to travel freely again.
Some of the Lebanon team had already returned to Beirut when the explosion happened on 4th
August 2020. The windows of our office were blown in and one of the team was admitted to
hospital with facial injuries from flying glass. We were fortunate to escape so lightly. Immediately,
the refugees the team works with rallied to offer help to sort out the office and, incredibly, to offer to
put up our staff members in their own homes. How often we find that those who have least offer
most.
The humanitarian corridors scheme, which brings migrants safely and legally from Lebanon to
Italy, had to be suspended in March due to the travel restrictions but we hope to be able to revive
this from next month. Negotiations are underway with the Italian government for a new protocol for
the coming years, and we are asking for new countries to be included in that. It has been good to
hear senior government ministers publicly calling for European Humanitarian Corridors from North
Africa, as this has been our clarion call for some time now.12 The scheme continues to be held up
as a model of best practice by, amongst others, UNHCR3, with whom we continue to work closely.

PARTNERPLAN
121 George Street, Edinburgh, EH2 4YN
T: +44 (0)131 225 5722 E: world@churchofscotland.org.uk
Scottish Charity Number: SCO11353
The team in impoverished Calabria has continued to support exploited migrant workers. In the
early weeks of the pandemic, their focus shifted to educating those in camps about the real threat
posed by the virus – rumoured to be a “white man’s disease” – and to providing masks and handsanitiser, particularly crucial in a setting where there is often no running water. Interestingly, the
health crisis has triggered a change in Italian law, long campaigned-for by activists, which will see
some of these exploited workers provided with documents, rights and conditions which were
previously denied to them. Our team has now turned its attention to finding accommodation for
these workers, the government having announced its intention to dismantle the tent cities where so
many reside in appalling conditions.
Lampedusa has again become the focus of media attention. The fine summer weather has, as
usual, seen an increase in the numbers attempting the deadly Mediterranean crossing from North
Africa. Whilst the numbers are significantly lower than was the case five years ago, any arrivals
pose challenges. The “hotspot” (detention centre) is full and, after an outcry about those arriving
being forced to sleep outdoors on the quay, a ship is now moored off Lampedusa to quarantine
those arriving for fourteen days before they are transferred to other parts of Italy to begin the
asylum process. The team there continues to offer what support it can to those arriving and to
work with the local community to dissipate tension.
In short, MH continues to work to improve the lot of those seeking a better life in a foreign place, as
well as the communities where they end up. For a team which relishes new challenges and being
creative, the pandemic is simply another obstacle to be tackled, with the usual tenacity and good
humour. It remains a joy to be part of that team.
The pandemic did, however, force me to postponed my long-planned deputation period in Scotland
during the month of April. I very much hope that this can soon be rescheduled – perhaps to early
next year – and that we can meantime maintain virtual contact. Thank you to all who continue to
encourage and pray for me, and for MH’s work. If you are willing, please pray for the following:
 A continued sense of responsibility in keeping ourselves – and others – safe from Covid 19;
 Revival of humanitarian projects affected or suspended by the pandemic;
 Reasoned debate about migration issues and recognition of the contribution migrants
make.
Every blessing
Fiona
@FionaKMedHope

This is the link to Fiona Kendall’s blog:

Read the advice on the link below from East Ayrshire Council:-

the URL for the above site is at:-

Organist and Director of Music

Applications are invited for the position of Organist and Director of Music, which is vacant.

This is an exciting opportunity for a talented musician interested in developing a wide-ranging church music programme.

The Organist and Director of Music we hope to attract should be a highly qualified, proficient organist and musician. We are seeking to find someone who is approachable and able to work with a wide range of people. Excellent communication skills are essential, as is a willingness to participate in church life and engage with the local community.

to whom applications for appointment, accompanied by a CV and the names of two referees, should be addressed. The closing date for applications is 29th February 2020.

Click on link for information on how to counter the virus:- 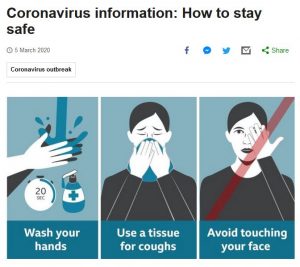 Here are some details of upcoming funerals taking place.

The vision of the Church of Scotland is to be a church which seeks to inspire the people of Scotland and beyond with the Good News of Jesus Christ through enthusiastic, worshipping, witnessing, nurturing and serving communities. www.churchofscotland.org.uk